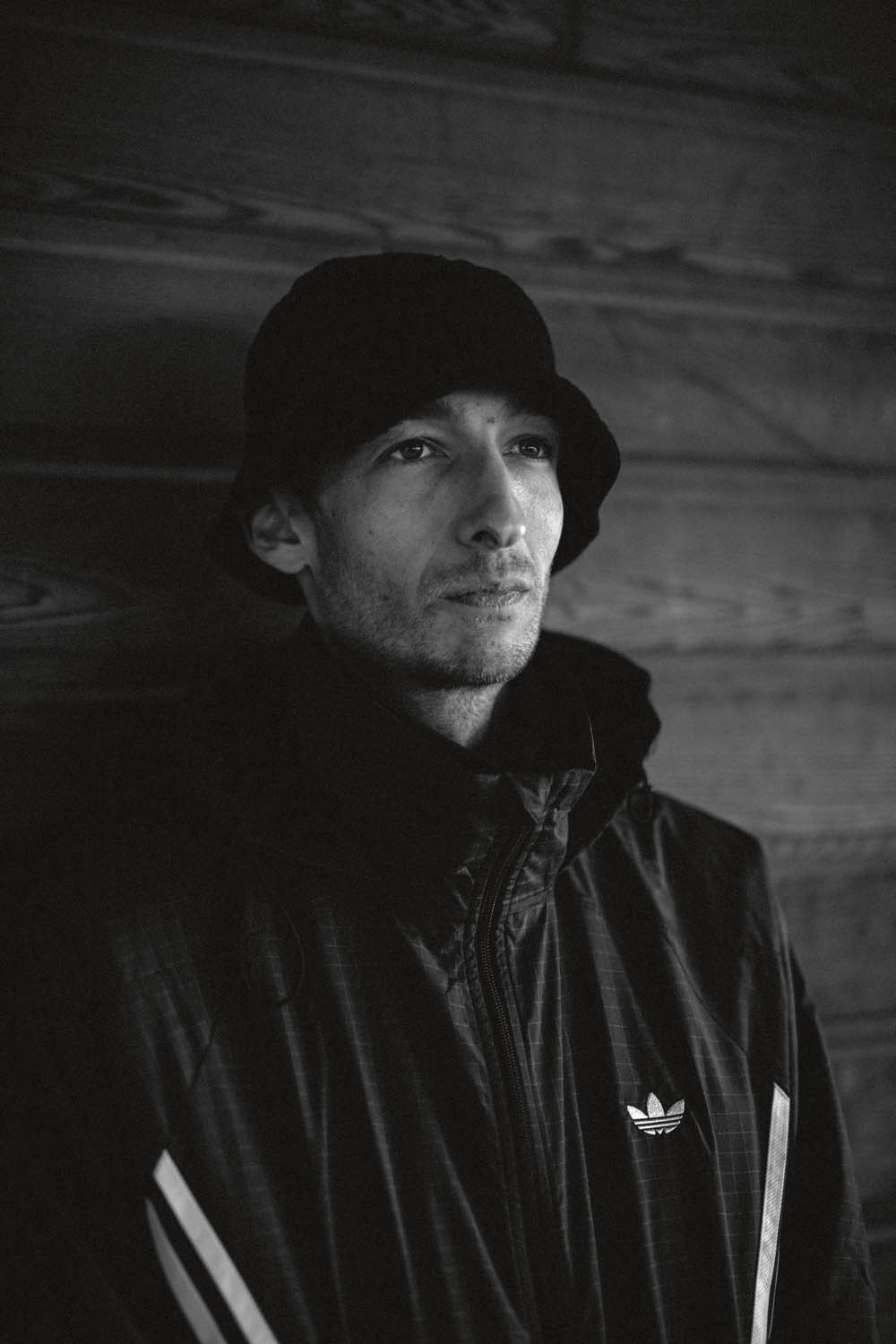 ‘When the day comes that I have to stop skating – which will probably be when I can no longer walk – I’m starting to feel like I won’t even regret it.’

Taken out of context I’m sure that statement sounds pretty melodramatic, but that’s probably because it bears the weight of almost 20 years of being a sponsored skater. Or should I say being ‘just a sponsored skater’ (which granted sounds a bit ridiculous). What I mean by this is that buried between those lines are all of the contradictions and the self-doubt that come with not being paid a living wage to ride your skateboard, despite it essentially being all you’ve done your whole life and all anyone around you – from your friends, to your sponsors, to the tiny Frenchman writing this article – want to see you do. 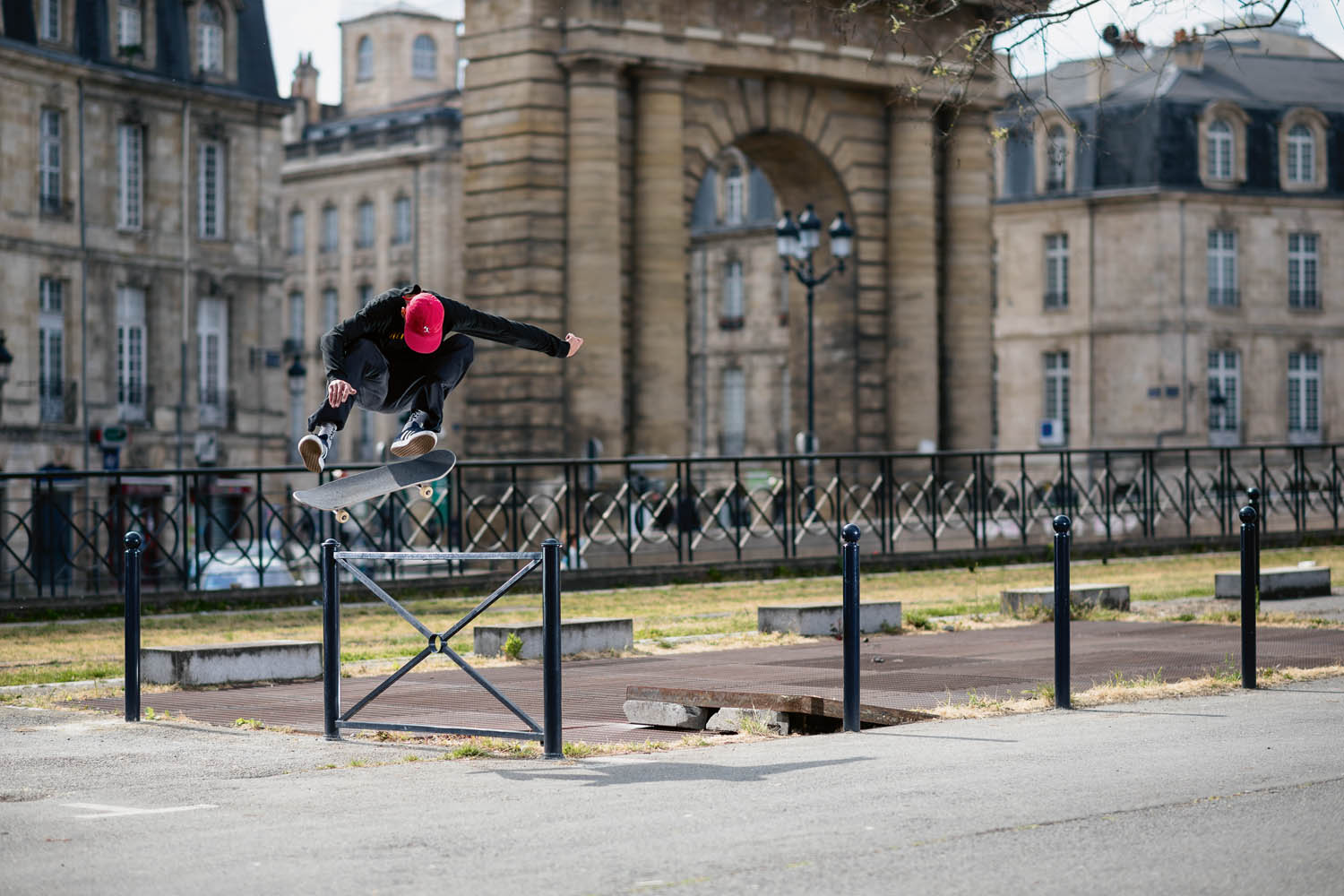 The first time I saw Gauthier in a magazine he was probably about 15. He was wearing cords, éS Accels, some dodgy striped H&M top, and just like every other French skater of my age who knew Chill was better than Sugar, I instantly wanted to be him. We all wore the uniform, we all wanted our noses to scrape the floor if we back smithed (I’d rarely get further than a smithty-50 though tbh) and we all HAD to learn hardflips that didn’t Muska so that we could one day do them down big stairs like he did in Rise Up (that never really worked out for me either). He basically had a cult following. This was around when Gauthier was just beginning to travel all over Europe with éS and Element (who soon after that would start paying him pretty well), and one of the first things I asked him when we caught up for this interview, was how his parents felt about him being sponsored and going on all these trips at that age: ‘I mean my mum wasn’t particularly keen for me to go…’ he explained. ‘Like most parents, school was the number one priority but she could tell this was something special for me and that I was the happiest boy in the world when I was on my board… Plus let’s be honest she had all these people at brands in her ear telling her that her son was talented and that he could really do something in skateboarding. And éS at the time was one of the biggest shoe brands… I guess I’m lucky that she really believed in me.’

Hearing that I could feel the adolescent in me thinking ‘we’re lucky too’: that Welcome to éS part got rinsed, as did that Big Push where his suitcase never made it to the UK and he was stuck skating in those tiny black jorts for 10 days, as did that 3-part éS Euro tour series where he was going around France and Spain with Mike Anderson and Sarmiento… But also the grown up I’m trying to kid myself that I am today was kind of there thinking: fuck getting all those mixed messages at that age. Like, ‘school is the absolute priority!’ but also ‘we all believe in you to make it in skating!’, which let’s face it, plants the seed that you don’t really have to worry about uni or whatever you want to do after school. You’re gifted and companies want to support you to focus on skating: why would any of that ever be going anywhere? 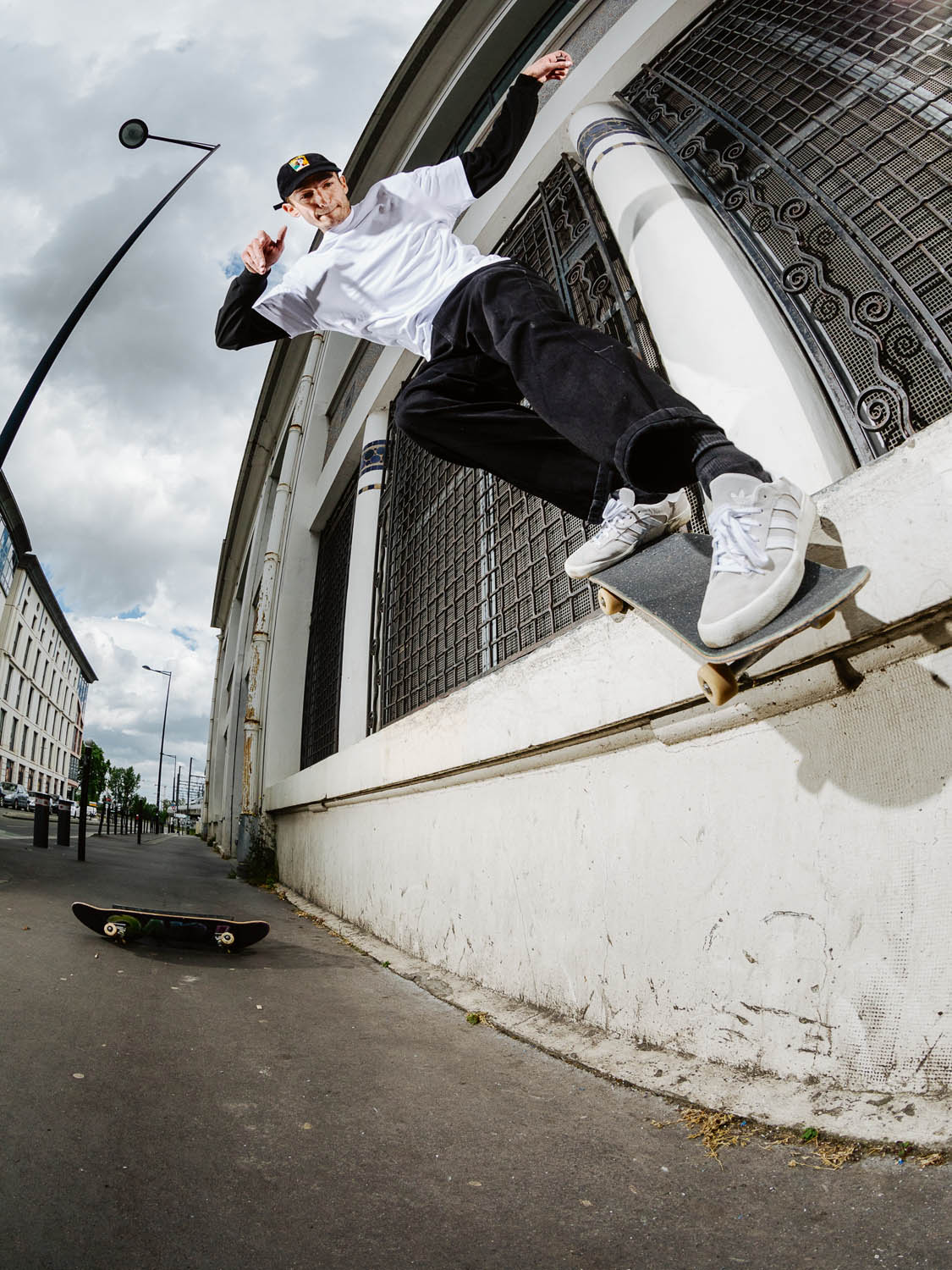 Fast forward a few years and éS has been discontinued, he’s no longer on Element, the money he was making from skateboarding has completely dried up and surprise, surprise, the beloved industry gatekeepers that were promising him fame and fortune are nowhere to be seen. It’s important at this point to make it very clear that Gauthier was not crying anyone a river about it then, nor is he now, it’s just quite an interesting journey with regards to thinking about how sponsorship works. Anyway when asked about how he felt about it all at the time he told me: ‘I don’t know, I mean just before that ended I’d gotten a little sushi delivery job because I needed proper payslips to be able to rent a place in Bordeaux. So I just naturally slipped into doing that really… And obviously I still skated, having sponsors or getting paid would never change that, that’s not why we do this, but you know it was very much for myself; I wasn’t really trying to film or anything. I guess there was that period a bit after that when I went on a couple of trips with Lakai in France, which was fun… But even then my motivation was nothing like it is today.’

What happened then? How come we just got treated to a legendary part in the Hélas video, a cover, tons of sick little bits in various adidas edits, this interview?! Supposedly he’s even filmed a full part we can release on the site when this interview drops (it’s dropping on the 9th of August!), and he’s sitting on a couple of minutes with Minuit’s Yoan Taillandier… Why is he suddenly so obsessed with giving it everything he’s got to be productive? 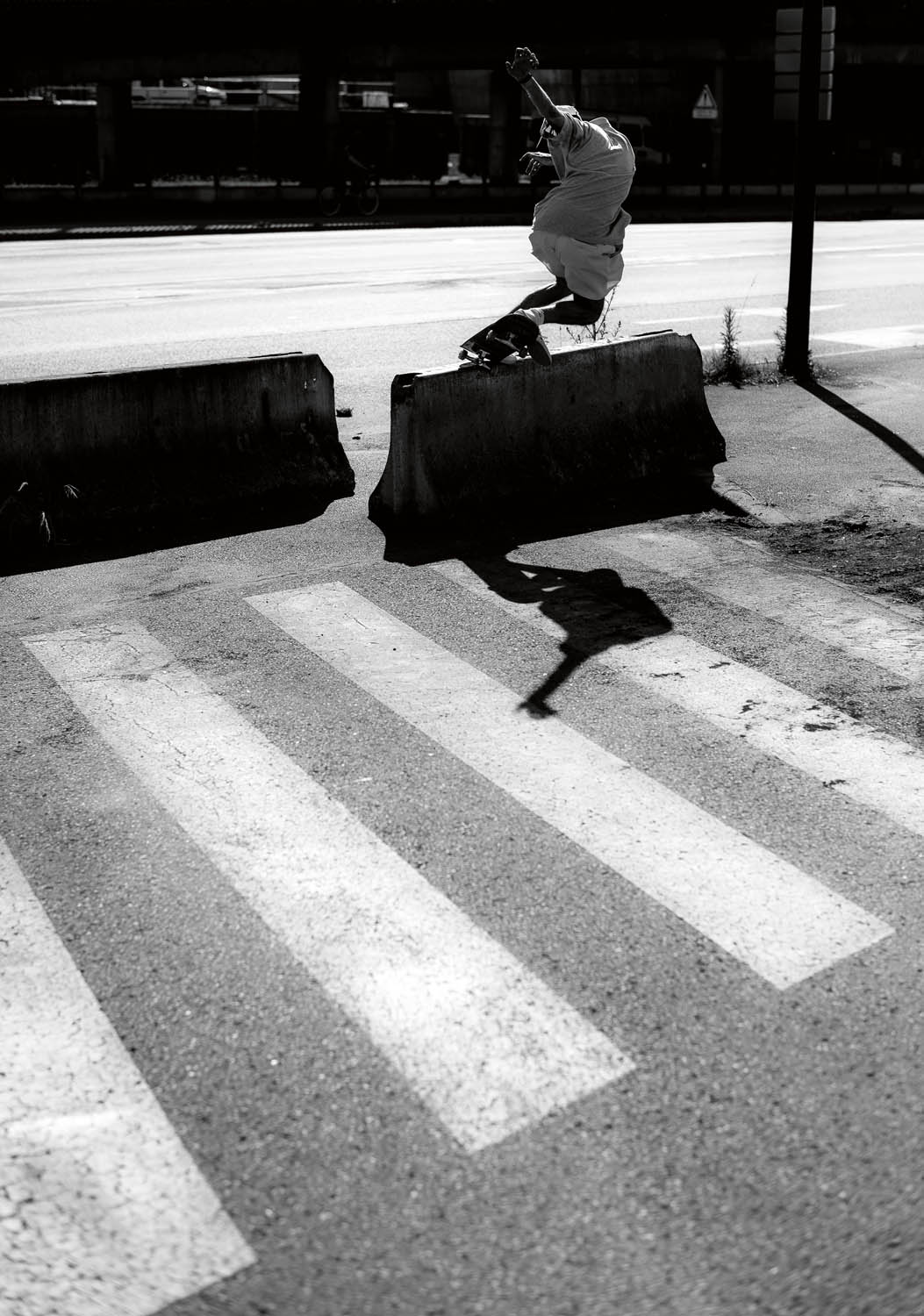 Hélas is what happened. Like most French skaters of my generation, those boys watched everything that’s being discussed here unfold and have always known that he’s one of the most naturally gifted, flavoursome technicians our nation has ever produced (and that bar has been set pretty fucking high), so they did what all of us had silently wished we could do without knowing where to begin: they found a way to get him excited about filming again. It started by luring him into coming to Paris to reunite with old friends, and amongst all the pétanque, pastis and office after-parties they slowly got him out stacking more and more, took him on a few trips with very little pressure and gently convinced him to work towards a shared part with Karl (Salah). They basically created the perfect conditions for him to want to start sharing his magic with the world again… And it worked. He ended up with his own FULL part, which got the loudest cheers at the Eiffel Tower prem, and since then he’s been more active on the ‘gram than half the pros we follow. It’s a bloody miracle. Next time you find yourself at HDV or Répu, ask anyone in their late 20s/early 30s and they’ll tell you the same thing. It felt like a Mariano-esque comeback, only with Gauthier there was never that Videos Days part, until now we’d pretty much only ever been drip fed post-Mouse-era amounts of footage, which obviously only made you want it even more… 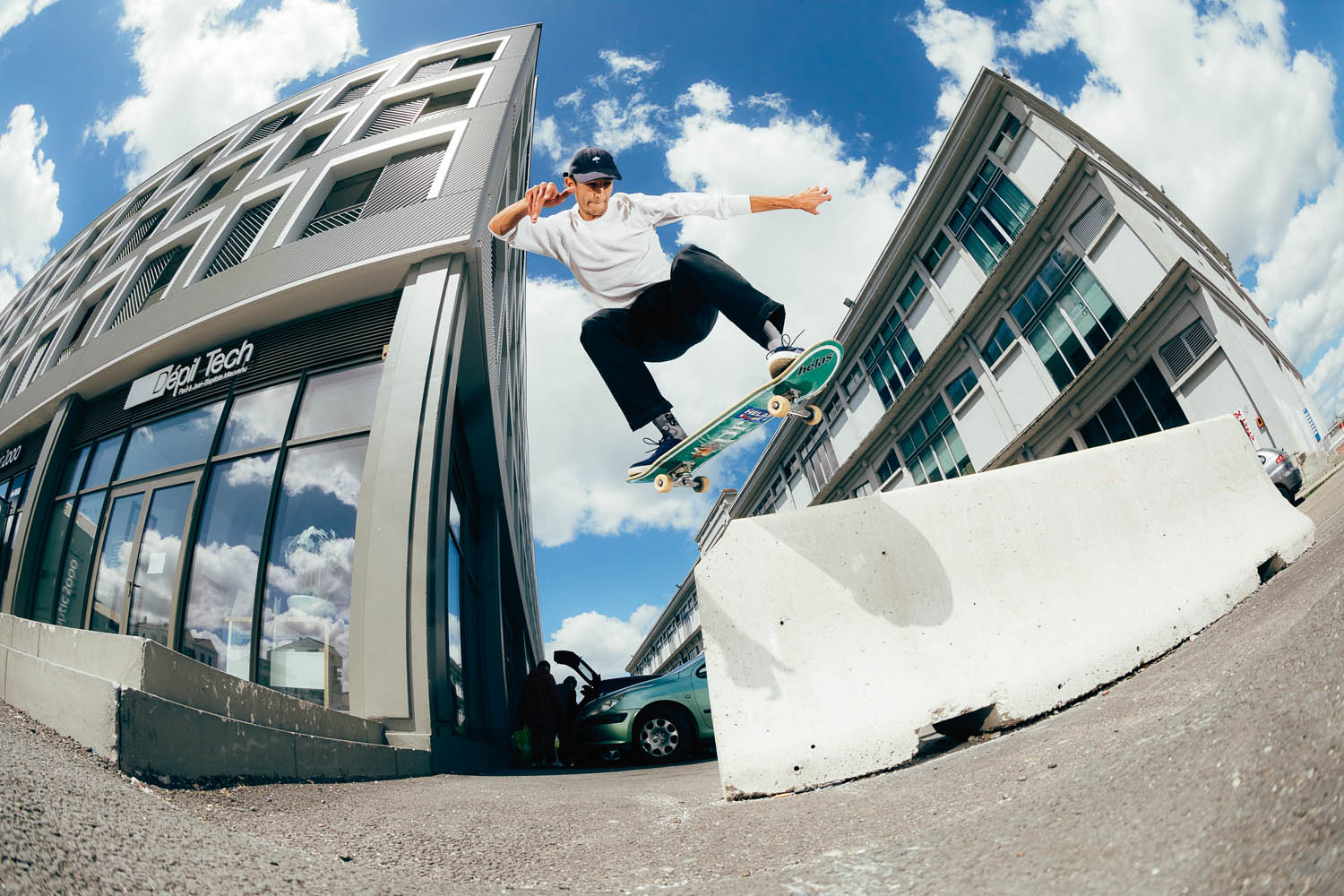 ‘Yeah… What’s crazy is that when I actually was getting paid to do it I was so young that I didn’t even really understand how it all worked or what was really expected of me,’ he explained. ‘I feel like I was just known as the kid that would skate flat next to the park at the Basel comp every year. I see myself now and I know that this is by far the best I’ve ever skated: I understand what’s important, how to think about putting together a part, etc. And you know, people tell me that they’re happy that I’m still doing it, that they want to see me skate. All I want to do is get as much footage as I possibly can out of the years that I can still skate like this, and I will. But also when earlier you asked me what’s been going on in my life… Well this is what’s been going on: every morning for the past couple of years I’ve been waking up and asking myself if today is the day I should sack it all off and just look for a job cleaning dishes in some Italian restaurant or something. That’s what’s been going on. Because I’m simply just not making enough to live like this right now.’

And there it is: the endless internal dilemma every sponsored skater living this life in limbo is subjected to, only probably exacerbated by having already been chewed up and spat out by the industry once. You know your time is running out but also that if there’s no proper money involved you’re realistically not going to be able to produce your best work, and not just because that full-time job will inevitably get in the way, but because good filmers deserve to be paid if they’re going to dedicate months/years of their lives to a project; they’ve got to eat too. If brands were lining up to invest in your future when you were 16, are you still allowed a shot at this at 33? Is there an age limit to this shit? How do you know if you’ve missed the boat? And should our industry be investing in all these young kids because of how we think they might skate in 15 years, or should we wait until they’re actual adults and their skating’s ‘matured’? If Tony’s spinning 900s at 50, could 30 be the new 20? 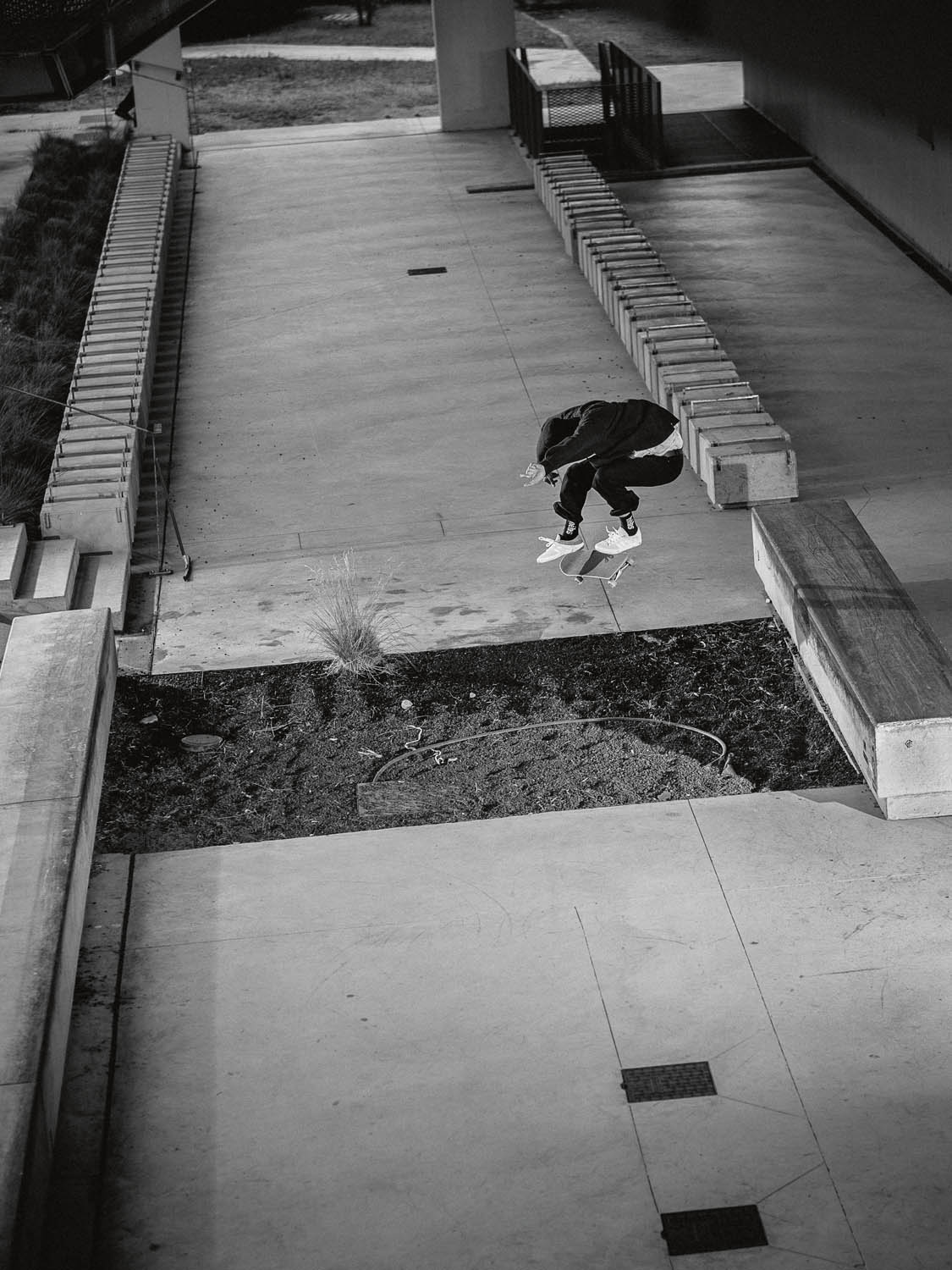 Since you can probably tell what I desperately want all the answers to those questions to be (and that I’m kind of spiralling) I’m going to take a step back from all that, and instead, finally offer you some much needed context to that opening quote. ‘When the day comes that I have to stop skating – which will probably be when I can no longer walk – I’m starting to feel like I won’t even regret it.’ After a short pause that sentence was actually followed up by: ‘Although if I did have to stop tomorrow, I know I’d also have less regrets than if I had had to stop five years ago.’

So sure all the uncertainty is weighing on him, just like it’s weighing on most of the people we feature in this mag (especially looking at the effects of all the Covid-related restructuring in certain parts of the skate industry), but all this was never about sponsors or money. Those things are just a means to an end. It’s about leaving something you’re proud of behind. Skaters, like musicians or artists of any kind, are obsessed with leaving a mark on this world, and it has to do justice to how much they excel at their craft. But excelling is subjective. Nate Jones excelled, but I’m sure that if you showed his video parts to half the people in the Olympics all you’d get is a ‘meh’, which is obviously completely fine. Things would get boring real quick if we all liked exactly the same thing. But following that logic you can then argue that there is no ‘peak’, or at least that it is also subjective, and since our skateboarding is constantly evolving for as long as we do it (my fav era of Jérémie Daclin is his current slappy phase not the kinked corner hubba one), we’re kind of all just constantly chasing our own tails… But then again that goes for everything: there will always be another ledge to wax, another potential DIY to build, another song you’d like to skate to or spot that could make a good photo. What matters is that these last few years of Gauthier really going for it gave us an amazingly filmed four-minute Fellas part to Scred Connexion, that I can go back to and rewatch every day of the week if I feel like it; or even this interview, which I guarantee half the skaters in Bordeaux will be ripping apart so that switch back tail can end up on their wall. This thirst of ours is insatiable because of the nature of what we do, it’s always going to be that way, but at least what we’ve already contributed to this culture nobody can take away from us. 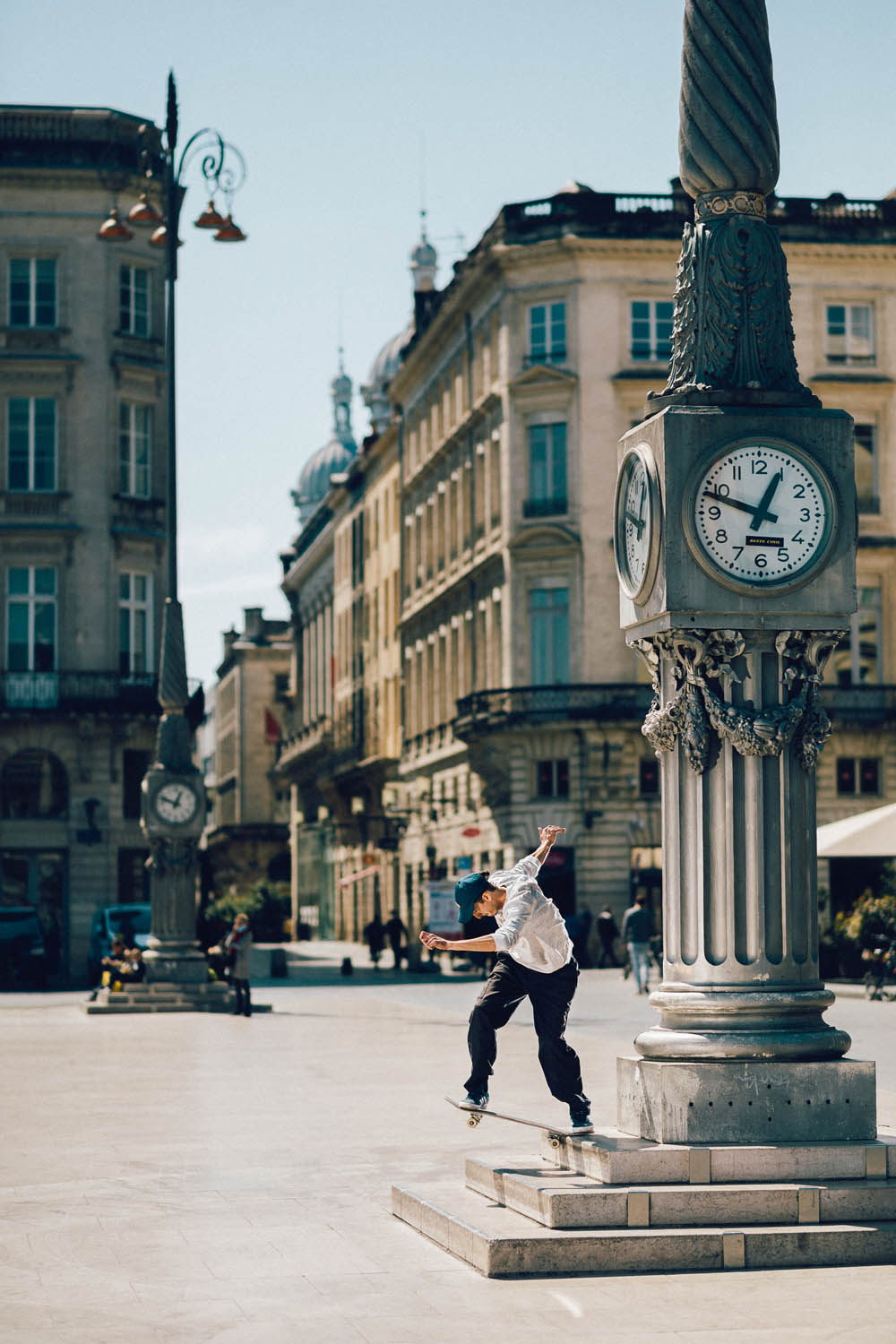